It’s good to be back.

Returning to the normal training report schedule feels like climbing back into the comfortable chair, beer on the table beside me and remote control where it belongs – in my hand.

With the Eels heading to Alice Springs tomorrow, today marks the only field session at Old Saleyards this week. This morning also signalled the return of eight NRL players, taking the squad size past the 20 mark.

Lane, Terepo, Mahoney, Niukore, Smith, Alvaro, and George Jennings took part in this morning’s session, with David Gower to roll up later in the day.

Before writing up today’s training, I’ll quickly wrap up the final session from last week. I think you all know what took its place on TCT last Friday.

Unlike the end of the previous week, today’s work wrapped up within the hour. It’s going to be a massive week coming up with a trip to the Northern Territory, so that’s probably a fair call.

The conditioning was as expected – sets of 800, 600, 400, and Ray Stone and Rhys Davies led the group today. I was quite surprised to see Stone lead the first run out and Davies only just ran him down.

The skills component seemed to be equal parts defence and attack as the group worked left and right corridors. It was a bit scrappy to begin with, as the play repeatedly broke down via dropped passes. As the drill progressed, the passes became sharper – offering a test for the defence.

The other skills component of note today was 3 on 3 drills within a grid. Beginning from a kick return, the attacking group had just the single possession from which to score. Plenty of adventurous, impromptu ball movement was in order – fairly entertaining to watch as the players showcased their skills kit.

The new players were immediately put through their paces by Trent Elkin, in what appeared to be timed runs. This was done with the entire group – more on why I mention that later. 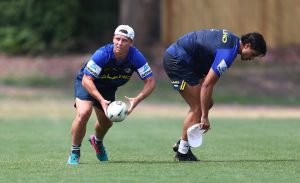 It was then straight into skills. With a larger group, there were more expansive set starts and ball movement. Reed Mahoney and Kyle Schneider alternated at dummy half. Will Smith alternated with Rhys Davies in the halves.

For a period of time the new arrivals were separated from the group. This is why I mentioned the players starting the conditioning together earlier in this section. They worked on play the ball technique (as the others did in the previous two weeks) and quick hands passing. As they completed these drills, the established group continued their conditioning. I assumed that each player has their daily kilometre expectation mapped out, and day one for the new blokes would differ from day eleven for the early returners.

The squad came back together as they drilled set completions into kicks. The message about mentality and having a positive mindset was emphasised by both Arthur and Elkin, with BA demanding that every player commit to making a difference.

It was no surprise to see the session conclude with sets of Malcolms before the squad split into their extras group. 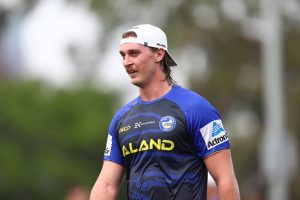 We’ve been observing his skills work with wingers, halves and dummy halves over the past two weeks. Today he worked with Lane, Davey and Niukore on their passing at the line. It’s always a positive sign to see forwards developing their passing skills, be it linking or offloading. The attack develops an extra dimension when damaging ball runners like Lane can also deliver passes like a half.

Thats all for now. I think you can all appreciate that there’s been some other distractions about, so this report was always going to be brief.

See you all in one week’s time!

Hollis is a big boy already. Any chance he could see time in 1st grade this year or bit too early?

A bit early. Hopefully he gets a run in CC Cup. You learn more about whether they can make the next step if they can handle playing senior players there.

He is a name to remember, a good kid and a smart kid as well. You will hear good things from him in time to come.

Mark, I agree. I’ve seen a fair bit of him in junior reps. As you said, he’s a big unit. Being topical, he needs to be extended soon.

Excited to watch him progress.A Wauchope junior (my home town)home of past greats Rocky and Mark Laurie Ian Schubert , been watching him since he was little, related in strange ways, A Bulldogs fan like his idol Klemmer, lets hope he doesn’t end up there as well.good kid.

Funny his old man isn’t that big.David is head and shoulders over him, gets his size from his mum, she is very tall, good netball player.

Egg man, he looks really big in this preseason. He has always reminded me of Klemmer, and he’d be close in size even now.

Klemmer is his idol.Dave is not a fan of the city but is determined to make the most of his opportunity.He was originally signed by Newcastle so not sure how he ended up here.definitely one to watch.The size of him now I reckon he would hold his own in the big league.

Cheers 60’s; Lane was superb this season for me; if he and Matterson can respectively fire for us it will go a long way to secure a strong attack.
Have you noticed any players being more vocal than others?
Capt Obvious here but gee it would be good to have a few young guys signed and delivered before festivas oops Christmas. 🙂

They encourage all the fellas to be vocal. Ethan Parry rarely holds back.