A fast track and mild sunny weather provided ideal footy conditions for today’s clash between Wenty and Penrith at Ringrose Park. With only two losses for the season, the Panthers entered this round in second spot on the table, whereas the Magpies were clinging to eighth position with a four from nine record.

Proceedings began with a minute’s silence in memory of Denis “Big D” Anderson. Both teams and match officials lined up across the field in recognition of the Eels legend and the tribute added a sense of occasion to the afternoon.

The match was only three minutes old when Jaeman Salmon put on a left foot step to break the line just into Penrith’s half, draw the fullback, then put Bevan French over next to the posts. French converted the try to put the Magpies up by 6 to nil. 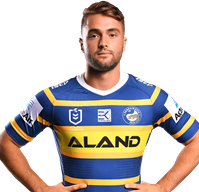 Just ten minutes later, Salmon again stamped his class on the game. After a series of Wenty offloads that didn’t seem to be heading anywhere, the young five-eighth took the ball to the line and found a rampaging Salesi Fainga’a running a great line. In turn, Fainga’a charged towards the line then delivered a terrific offload in the fullback’s tackle to put Ethan Parry across for the Magpies second try. The conversion from French took the score to 12 nil after only 14 minutes.

The action came thick and fast not long after. A long cut out pass to an unmarked Greg Leleisiuao five metres out from the Panthers line proved too difficult for the winger to handle, and the dropped ball provided the visitors with a 20 metre tap. Within a couple of plays, the Panthers had cut the retreating defence to shreds, with their right winger in open space for a certain try.

However, it was not so certain in Ethan Parry’s mind.

The big centre chased the Panther’s winger to the line before launching himself into a tackle which dislodged the ball. It was the perfect example of never giving up.

With the play going end to end, it would be the Panthers who would strike next. A contested kick inside the Wenty quarter earned Penrith a scrum feed and the sustained pressure proved too great for the home team. A shift to the right saw the Panthers centre, McGrady, cross out wide. An unsuccessful conversion left the score at 12 to 4 with fifteen minutes remaining in the half.

The Panthers defence were doing a good job holding out the Magpies attack and it would be a penalty goal that would provide the next score change. French’s kick from directly in front of the posts extended the lead to 14 to 4 with less than ten minutes to go till oranges.

Just when it seemed that the scoring was finished for the half, the Panthers demonstrated why they are sitting near the top of the table. After punching holes through the middle in a great set of six, a clean break was rewarded with a try to Fearnley next to the posts. Fortunately for the Magpies, the close range conversion hit the posts and the teams went to the sheds with Wenty leading by 14 to 8.

The first 20 minutes of the second half were a bit of a scrappy period, marked by penalties and incomplete sets from both teams.

With about 15 minutes remaining the match again came to life.

A late hit on French after a kick saw the Magpies extend their lead to 16 to 8 via a Brad Keighran penalty goal. This only seemed to spark the Panthers into action.

After regaining possession from a short kick off, Penrith parlayed this into a repeat set with a well earned penalty, before Martin crossed the line following a shift to the left on the last tackle. Goal kicking was proving to be Penrith’s Achilles heel with the conversion again failing.

At 16 to 12 with less than ten minutes left, the match was on a knife’s edge – but the result would not be decided until the final seconds.

Though one would have expected Wenty to tuck the ball under the arm with possession in the Penrith quarter, and less a minute remaining, the Magpies instead moved the ball. The rewards were theirs with a Greg Leleisiuao in-field charge proving impossible for the Panthers to defend. The unsuccessful conversion saw a final score of 20 to 12.

In a match that saw the forwards do their job, and the backs deliver the big moments, there were plenty of positives to find for Wenty as a team. Their intensity was worthy of a match against a top of the table team, and though the execution wasn’t always perfect, the effort achieved the result.

From an individual perspective, best on field would have been shared by French (in the captain’s role today) Salmon and Minhinnick. Special mentions were also deserved by Parry and Fainga’a.

For Eels supporters interested in Oregon Kaufusi, the big fella churned out a solid 50 minutes. With Brad Arthur dropping him back to Wenty to get some longer minutes under his belt, this will hopefully signal his return to the top grade.

That is a good effort. And effort seems to be the operative word…
I hope Oregon and Salmon did enough to come back.
How has Fainga’a and Parry been going?

Both had solid games. Parry’s chase to stop a try said plenty.

It was a good win today….nice to see Bev playing well, and the young brigade continue to do well

Wenty are performing better this year. The inclusion of young players has helped. Rip Taylor is a very experienced coach at this level.

Thanks for this report sixties as I we really looking forward to it being published. After Church this morning I got on to the live match report updates on NSWRL’s web site, and was pleasantly surprised to see the score at first look being 14-8 in Wenty’s favour, I tried to keep up with the score updates but it was very slow so waited with baited breath for full time and very much more pleasantly surprised to see Wenty come out winners. The tribute for Big D was nice to read also, and Wenty did him proud with that win,… Read more »

MJ should be right but I think Stone might be another week away.
Oregon was given more game time so hopefully he’ll return.

It’s nice to read that someone from the club remembers Big D.

I believe we’ll see something this week. With Indigenous round events planned, and Big D passing on the Wednesday, the planned tribute will take place this Friday.

I find it quite insulting that G Jennings keeps getting a start in the NRL side in front of French. Jennings has been embarrassing this year.

French isn’t being considered for the wing. It appears to be that fullback is his spot to challenge for, and he’s put up a strong case in most games. Remember, many, many people were critical of Bev on the wing last year.

Yeah he didn’t perform well at all on the wing last year but a lightweight winger is always going to struggle in a side that was going as bad as us in 2018.
I think BA is now just obsessed with big wingers even if they are talentless error riddled nuffies.
I mean if he’s going to persist with Jennings he might as well put Terepo on the wing. He will make metres and three or four errors a game😂

I’m happy being back to Sivo and Fergo. Aren’t you?

The rev aka Snedden.

Good write up sixties. On parry correct me if I’m wrong but his like 197 cm tall n weighs around the 95/100 kilo mark right. I’m hearing he will be given a shot after June 30 is this correct or just dribble ? On French I can’t see him playing 1st grade with us anymore. I think with dwz coming I think brad is going after big body guys to get over the advantage line. Salmon n kaufusi sound like they had great day out. Really hope they can picked for 1st grade if not I won’t be a happy… Read more »

sixties
Author
Reply to  The rev aka Snedden.

Yes, Parry is tall and weighs in around 100kg. I don’t know about being given a shot. All rookie contract players become eligible for NRL selection after June 30. Look back at Marata’s beginning. It was exactly the same as Kaufusi. He was eased in with his minutes. I don’t think there was any rush with BA at all. But you can’t go signing new players, or even extending others, without having a coach confirmed. In retrospect, I would much rather that Oregon got his minutes up in NRL rather than Wenty. I say that because few forwards would have… Read more »

The rev aka Snedden
Reply to  sixties

Did the club look at Jason Taylor or Griffen or a pommy coach ?
I agree about kaufusi I think he should have got more game time in the top grade. I really hope salmon is back in 1st grade. He sounds to good for the lower grades.

Great post! Which players from Wenty do you think will get a call up when SOO takes half our team?

Rip Taylor one of the best coaches…he would run rings around BA.

Rip is very experienced at this level. Believe me, with everything that BA has endured during his time at the Eels, he’s still done a mighty job. I guarantee, plenty of coaches would have walked – and they did before his arrival.

I was at the game and ran into three NRL clubs that were watching Salmon with much interest. One of them said that they couldnt believe that BA made him the scapegoat for the Parra woes. He also told me that Salmon’s agent is none other than Sam Ayoub!!!! The kid is only 20, and lots to learn but hope he doesnt get despondent and walk.

And you wouldn’t have instigated the conversation with a negative perspective on Salmon being in reggies eh Big J? IMO it wasn’t BA that made him the scapegoat the kid did that himself by his game against Melbourne which included a weakness which was exposed that boys who want to be men have to become aware of in themselves. I also believe the time back in reggies will be the making of him with competition in the club for his preferred positions of 5/8 and centre will only add to his conviction to overcome and excel if he is the… Read more »

Ha! You’re right Rowdy. I was stirring the pot!! I agree with you totally, and Salmon is taking his demotion in the right way. I would only suggest that more changes should have been made after the Storm game. Unfortunately the next two games proved this suggestion correct.