I’m not going to waste any of your reading time describing the conditions at training today. Every single one of you knows what Sydney is like right now.

But despite the oppressive heat, this was a true footy Friday.

After the stretches, warm up and some skills work down a corridor of the field, it was time to launch into what was arguably the longest opposed session of this pre-season.

There were a couple of omissions with players still in rehab, as well as some players in orange, but the majority of the squad were today given more “game time” to hone their combinations or push their claims for a first grade spot.

The NRL referees were again officiating the proceedings, and like other sessions, they joined in with the conditioning work. I’m guilty of bagging their decisions but I won’t bag their work ethic or fitness.

It was Blue (NRL) vs Red (interchange, challengers and rookies), though this doesn’t mean that places are set in stone. However, as we get closer to the season proper, the likely NRL line up will need more time together. 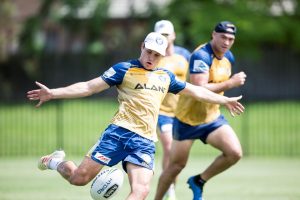 Moses was in good touch today.

* An early Mitch Moses break to put Dunster away for the first try. The break came from clever individual play and the support play from Dunster was first class.

* A magnificent try-saving ankle tap from Bevan French on a flying Dylan Brown after Brown looked to have beaten the fullback close to the line.

* A heads up defensive decision from Ray Stone to help shut down what looked like a certain try. 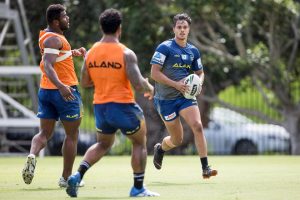 * With Kaysa Pritchard filling a halves role for the Reds, Kyle Schneider operated out of dummy half and looked very sharp.

* The continuation of consistently heavy collisions in defence

* Big talk between the players. Most impressively, as the players hit their final conditioning, they found their loudest voices.

* Blake Ferguson (he’d obviously been training in the gym) walking alongside Dunster, offering advice after a break in the play

Successful junior development requires making maximum use of your best local talent as well as identifying and nurturing young players from far and wide. Along with staff such as Anthony Field who clock up the kilometres attending matches and carnivals, the Eels have a network of scouts, such as Tye from Queensland whom I met yesterday.

The visiting players with Fieldsy.

This morning, the Eels hosted 21 young players from North and South Islands of New Zealand, the Northern Territory, Queensland and Country NSW. Aged between 14 and 17, the boys have been in camp with the Eels in the lead up to the Junior Rep trials this Saturday at Revesby.

It was a tremendous opportunity to catch the senior team go through their paces in what was a valuable education in the work ethic required to become an NRL player. The players watched on as Anthony Field either answered their questions or drew their attention to certain aspects of training or play as it unfolded. 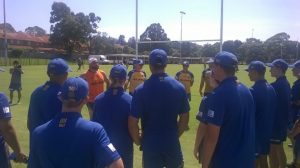 Tim and Tep talking with the young blokes.

After finishing their session, Tim Mannah and Tepai Moeroa spoke to the boys about their individual preparation and that, no matter what level they get to, to always remember why they play the game – because they enjoy rugby league.

Before they took them on a tour of the facility, they also encouraged the players to ask as many questions of the Eels squad as they could about what works for them. Mannah then explained how his pre-match routine had evolved over the years. 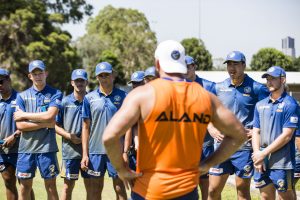 This is the rugby league journey for out of town youngsters. Recruitment managers like Anthony Field have to make crucial decisions about when to leave certain players at home, or when to bring them down to Sydney. Some are best left at home to continue their education, some are best to be placed in a school in Sydney for the exact same reasons. Some players will enter the playing ranks at Matts level, others at Ball. More “senior” juniors are recruited for Flegg. 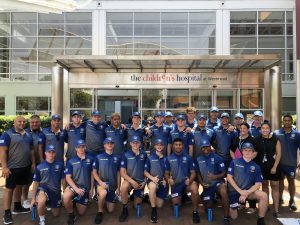 For anyone interested in viewing this weekend’s Junior Rep trials, you can get out to Neptune Park at Revesby, from 9am this Saturday.

That’s another week of pre-season done and dusted.

The players would be feeling the bumps, bruises and strains. The staff were smiling.

I’m sure it will be much cooler on Monday?

Why was dunster in the nrl team.

Because there was a couple of players missing due to rehab and injury. Forty mentions Ferguson walking with dunster down the sideline during a break in play giving him advice. Obviously Ferguson is first choice on the wing but it’s fantastic of him to be advising dunster even though he could be sitting on a spin bike in the shade if he wanted to.

I think this also shows that we won’t be seeing French on the wing again.
I think the focus for him will be fullback and halves.
I’m imagining that if we have trouble early on in the season with Centre and 5/8 then Gutho will move and fill that void and French will slot into fullback, or least likely into 5/8.

FUUUUUUUI
(keep forgetting to add my name and you can’t edit it!)

Unless something changes, I see French having to force a spot at fullback.

Hey sixties
Thanks for the update. I gather the club will list all junior squads once finalised and also the junior clubs they come from.
It’s a great insight into where players come from and helps us see where they have come from.
Hope the wkend cools down for you mate…

Another great report, especially comparing the conditions that are still so so nice for those who are masochists. Sixties I don’t know how you do it, but all these reports are top class, thanks for it especially the bit on the youngsters in the junior development. Interesting for me that Kaysa was playing half, I have suggested this in the past, where he could work well, but has strong competition for it, but could also help him pace his game better. Also the defensive work of Stone, who does have a future from my perspective, likewise the effort from Bev… Read more »

Thank you for the kind words Colin. Much appreciated.
They have three dummy halves in the full time squad, so someone has to fill in elsewhere. The other day Schneider spent some time in the halves. When you have players missing (Smith is in rehab at the moment) others have to fill the holes. Wenty have Rhys Davies as halfback, but he’s not part of the full time squad. So in creating an opposition, players are sometimes playing out of position.

No worries mate, saying it as it is. You continue to raise the bar with the reports and make the off season fly, not long now for the real action to start.

Every little bit of extra’s for the younger players they get with the top squad can only be a benefit to and for them, club and supporters.

Agree about that experience Colin. It will make a big difference to their future.

Sixties thanks again for another classy report. like Colin I find that it is quite remarkable how you manage to make each one of these reports so noteworthy and interesting. It is now that we will begin to get an idea of what our team will look like in Rd 1. It was interesting for me that Dunster was seen as the backup for Ferguson. Obviously it is unclear how much weight you can put in that. Notwithstanding it is clear that the club hold him in high regard. Just as a point of interest, Neptune Park at Revesby is… Read more »

Dunster is doing an outstanding job, but I think it’s more a case of him being a right winger and them using a specialist right winger in place of Fergo. He’s not in the top 30 so he couldn’t get a run till after June 30.

Sixties to you have any info on the rumours we’re going to drop M Jennings to ISP and not play him in NRL? If true, who do you think might be our outside backs?

Anthony, I’m not sixties but from my thinking MJ will be in the same boat as all the other eels players and he will be selected in the appropriate grade according to his training efforts and then in the season proper.

As for the news in the media about MJ being put back to ISP, the particular rag along with most if not all their RL experts love bringing out sensationism in news, more especially when it concerns the eels, brings them a larger group to read their rubbish.

I already put very minimal stock in the story knowing it was written by the hack Rothfield. Was just wondering if there were any signs at training that might add any fuel to the fire or not

No signs at all. Jennings is training very well. It’s important that he improve on last year and his attitude indicates that he’s planning to.

Good update Sixties. It’s to be hoped that training in the heat better prepares the team for those hot March games – we certainly didnt cope in 2018. There is more depth this year across the forwards and with the like of Dunster filling in for Ferguson.
Query – what involvement does Mark O’Neill have in these development sessions and in training ?

I haven’t met or seen O’Neill as yet. I don’t expect to see him out on the field there to be honest. I only see the field sessions.

Thank you for the reports. I am looking forward to the new season. While I look forward to watching the new recruits and young kids, I have faith that the biggest improvement will come from the players who played last year- regaining pride and proving people wrong is often a great incentive. In the videos put out by the club, players like Manu, Tepai and Daniel look noticeably bigger. Good to see Blake Fergusson helping the younger players. He quickly learnt coming to Parra has positives and negatives. Big supporter base equals lots of positive support but also the odd… Read more »

Well noted Shelley. For as much as the younger players have helped to drive that hungry for success attitude to training, the senior players have an important role in helping their transition to senior football.