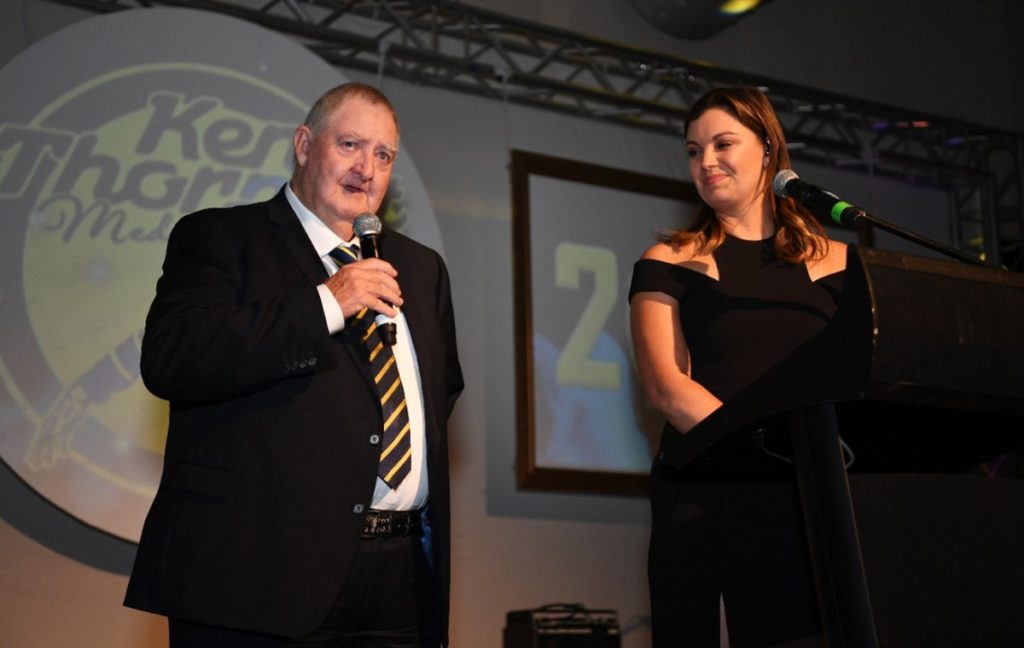 In Episode 7 of The Tip Sheet, TCT is joined by a legendary character and beloved figure at the Parramatta Eels, Denis ‘Big D’ Anderson.

Denis or ‘Big D’ as he is affectionately known as by everyone involved with the club is the Football Operations Assistant, handling a bevy of daily tasks to keep the NRL squad and coaching staff running smoothly, but beyond that he is hailed for his tireless work in junior football.

Inducted as a Life Member of the club at the 2017 Ken Thornett Medal, ‘Big D’ is perhaps the most colourful and storied individual at the Eels. Armed with enough stories and recollections to fill an Eels encyclopedia, Denis shares his experiences from the golden days of the 1980s right until current day.

Join Sixties and Forty20 as they sit down with Denis to delve into his wonderful tenure at the Eels!

Once again gents, absolutely outstanding!
Big D is an Eels legend and deserves his Life Membership.
I can’t wait for the season proper to start, not long now!
Go the Eels!

Absolutely agree Jason. What about when a previous coach gave him the choice of NRL or junior reps and he chose junior reps! No juniors – no NRL…. Says it all.

Yep, speaks volumes about the man!

These sort of people are the true legends in each club, they maintain culture when players, coaches and managers move on. I am sure most clubs have a Big D, it is absolutely wonderful that we are able to hear from and celebrate ours. His words on our players building a strong, collective, positive and hardworking culture is so wonderful. It is also very encouraging his words on Hayne, said without prompting and the changes he has seen in him, re culture and work ethic. I am gaining more hope that Hayne may work out very well for us, both… Read more »

Well noted as usual Shelley.
Rugby league is built on people who give up their time above and beyond the duties they take on. The dedication and passion of blokes like Big D is not lost on the Parra club. The ovation for his life membership was something to behold.

This is getting ridiculous. How good are these interviews?

Thanks mate. Its an honour for us to be able to share these interviews with fellow supporters.

Wow, the pride, the passion and belief big d has is infectious. Wonderful listen on a Saturday afternoon.

Looking forward to a few more of these interviews.

Thanks Jack – yes, Big D has an incredible passion for the club. We’re lucky to have a bloke like him involved with the club, from junior reps up.

Thanks fellows. Big D is a genuine chief cook and bottle washer without whom the club can’t properly function. Love these kind of people. Glad Big D is with us and congrats to Big D on his life membership.

Big D seems to be Parramatta’s version of Mr Wolf out of Pulp Fiction. A Mr Fix-it who can be called upon when everyone else around him is losing their head. It was great to learn about his sense of duty and passion. The club is in a better place because of him.

People like Big D are the heart of rugby league clubs – and his stories are legendary.

I know that to be the case, and likewise in other organisations as well. However, you barely hear about them. The mainstream media is not interested in characters who are so genuinely full of life and commitment. Only if such people should fall off the rails or meet with foul play will the press come calling. Thus, I am grateful that you have taken the time to buck the trend in this regard. I’m tired of political tyranny, self-aggrandisement, royal weddings and augmented realities.

Anyone who’s had the chance to talk footy with Denis will end up:
1) More knowledgeable
2) in awe of his passion
3) With a sore jaw from laughing

Oh, but there’s more than that. Surely! Just by listening to him I can tell that Big D would be the sort of avuncular chap who would enjoy sitting at a campfire to sing such classic moonlight anthems like Let it Be, No Woman No Cry, the River and American Pie. Now where did I leave my guitar?!

I dont think there is anyone more qualified or informed than dennis in our club to speak about its current and past cultures and performers therein ,not only is he a fountain of knowledge but true gentleman of our club , i feel privileged to count him among, my friends .

Ditto anonymous. No matter where you go – when Parra is involved – there’s Denis.

Thanks so much guys. Excellent work.

Thank you Anonymous and Pou. My thanks to Big D.

Another great interview and insight into the people that make our club tick.
It’s great that the club gives you access to the staff and players so we can get that little bit more.
Thanks for.putting in the time and effort in doing this.

How about the coach ?

The interviews wouldn’t happen if the coach didn’t support it. One day we might get to interview him.

Cheers mate. We appreciate that support and we’re glad to be able to share these insights from great club people.

I’ll be keeping September free now – Big D told us too! Enjoyed this one guys. Another great insight from inside the club.

Very humbling to hear this one for Dennis or Big D. It’s these types of people who keep clubs going; let alone an NRL club. How good was it to hear him recount his time at Parra and mention how much he loves getting out of bed for work…..that to me epitomises the man and of course his love of the club. Great work TCT. Superb, and I listened again to this one today and noticed more. His comments about Moseley and McMartin ring through. I didn’t see McMartin but Moseley IMO was one of the best in the 86… Read more »

Thanks Mitchy. I did watch John McMartin play. Very underrated and a good ball winner in the days of contested scrums. Brought back memories when Big D mentioned him.
Been very glad to introduce Big D to more Eels supporters.

Loved watching John McMartin, great hooker. Disappointed when he left for the Sharks.