Watching the match on the TV last Sunday was a really weird experience for my household.

Was it resilience and skill on display in the second half or did it just stack up well against what was a first half of missed opportunities and poor execution?

Apart from the brilliance, skill and determination that was Mitch, Matto and Ice, our players made really poor and for many uncharacteristic errors and decisions that cost momentum at critical times.

To their credit the Roosters made the extra effort to get to the tackle, to chase the kick, and force us into that one more choice. They made us pay for our mistakes, mistakes that were critical. 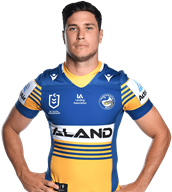 While we certainly did not give up, I am sure the players recognise that poor decision making kills a team come the finals. They are the only ones who can fix those lapses in concentration and I believe that they will.

I must admit that as the game went on I just wanted it to end. In my heart I always thought we would fall just short. However I also wanted the round to be over because then we could look forward to moving into round 11 and returning home.

It feels like a century ago since we played at home on Easter Monday and I cannot wait to get back to CommBank Stadium. Most teams play better at home, especially when they have a passionate and loyal fan base behind them as we do. We all know that our team lifts when they get the Blue and Gold Army behind them.

While the conditions are not always the best for free flowing football, I love the atmosphere generated when we play a high profile match in front of a packed stadium on a Friday or Saturday night.

A look at the draw reveals realised just how challenging and strange the Eels draw is this season.

In the first ten rounds, there have been only three matches played at CommBank Stadium. The other seven rounds have included games in four different states/ territories as well as the regional city of Newcastle.

The extensive travel, the hostile crowds and the long list of injuries have all combined to make the opening couple of months extremely challenging for the Eels.

Even allowing for missed opportunities, a six from ten result in the context of the adversity faced across the first ten rounds is worthy of drawing a glass half full reaction at the very least.

For the remaining 14 regular season games, 12 will be in Sydney. Of those, 8 will be home games at Commbank with another 2 being played at Accor (formerly ANZ) Stadium, venues that traditionally generate enormous pro-Eels crowds and correspondingly the team’s best football.

Supporters now have the chance to show our support and help our boys gain momentum and consistency.

What better way than to sit in the stands this Friday night against our bitter rivals, Manly. 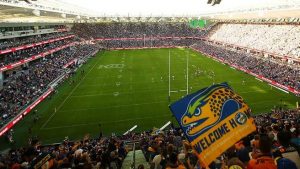 What a stadium – CommBank

Playing at home does not guarantee victory, but like over twenty thousand other Eels supporters, my family and I will return to a stadium we love, cheering on the team that we love. And in full voice, we’ll be reminding the referee and his flag carrying assistants about the blatant knock-ons or forward passes that they will inevitably miss.

The added bonus is that I can watch the game whilst talking footy with invested and loyal Parra supporters without having to listen to the very predictable television commentary. It will be paradise!

Let’s hope we see the Magic Round second half Eels team this Friday.  I don’t like losing to any team but Manly is not just any team. I don’t care how we beat Manly I just care that we do.

Our forwards, especially our middles, must aim up. On paper we have a huge advantage there, but as last Sunday showed, it’s what happens on the field that matters.

We must improve our discipline and stop giving away penalties to gift our opposition good attacking field position.

To me this game is simple – if we don’t gift possession and territory to DCE and Foran, we win. If we make errors and give away silly penalties they will make us pay.

I look forward to seeing all of you there in the stands on Friday, rugged up with your scarfs and beanies on. When I put on my scarf and beanie I know the footy season is in full swing.

I have a feeling our boys will show up, get the win, and those last four weeks away from home will be worth the wait for all of us.

Hopefully, the Eels can get it together and show what they are capable of.

Tks Shelley. One thing I do know, Des Hasler will have a targeted game plan. This game last year their forwards competed hard, blunted our ruck game and their backs shifted wide from all parts of the field. I remember sitting on the 20 mtr line and hearing Fergo call for numbers, and it was Manly’s 20!

Absolutely spot on. In many ways the Roosters did the same thing last week, spreading it wide early, at least mr Parker is out injured, we always manage to make him look like Steve Renouf.

I think the key for us will be offloads. Manly condense the defensive line and offloads kill them. We need junior to play well and Gutho and Reed to be backing up looking for offloads. I actually think if we win we will win well but that is only if we control the ruck through offloads.

Thanks Shelley, lets hope the team can find some consistency and strong heads to start the game well.
Manly have a decent team and their coach will know where to attack us. For me the first 10 games was an ok result but we left 2 wins out there and we need to show some consistency soon otherwise we could be also-rans.
No doubt with some players coming back it will help.

Shelley just on the home games. We play 6 of the last 8 at home, To obtain such a rush at the end of the season means we were light on at the start of the season.

I think this will have benefits for our late season charge. However if we are unable to address our consistency issues it will all be for nothing.