No discipline. No respect for the opposition.

It doesn’t matter how you put it, Easter Monday’s effort from the Eels was just… you can add your own expletive.

Being the die hard Eels fans that we all are, we dread these games. We can fire up against the likes of the Storm and Panthers, but when it comes to the lower ranked teams we invariably struggle.

Why do the Eels appear to go out there thinking they just need to turn up to win?

From the outset you could see the Eels just wanted to score off every play. Patience was in short supply.

From dropped balls with the line wide open, to poor passing in traffic, the more Parra forced things the more they failed.

Where was attention to the basics? Where was building into the game?

Parra just wanted to play fancy footy from the outset and they put themselves out of the contest.

It should be noted that the Tigers game plan worked well in slowing down Parra’s play the ball. They didn’t care about giving away penalties or set restarts. Their mission was to stop any go forward and momentum the Eels usually mustered from quick play the balls.

Let’s examine whether the numbers tell the tale.

The Eels played with 51% possession but could only complete at 68% (27 from 40 sets). Time wise the Eels had the ball for just over 40 minutes including 15 and a quarter minutes inside the Tigers 20 metres.

The Eels Post Contact Metres came in at 517, with Will Penisini topping the Eels count with 61 metres. 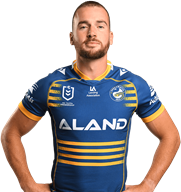 Clint Gutherson led the backline running metres with what was also a team high 177. This was followed by Penisini with 151 running metres.

In the forwards, Regan Campbell-Gillard maintained his high standards with 172 running metres off 14 carries.

The Eels made 5 line breaks and made 10 offloads, but this never seemed to facilitate some much needed second phase football.

Defensively, there were a lot of lapses which gave the Tigers easy metres. In a disturbing trend, the Eels initial contact was poor and the Tigers beat the first and second defenders with ease on multiple occasions. Parra’s jamming left side defence also allowed two easy Tigers tries. 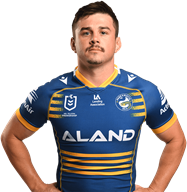 Our top tackler again goes to Reed Mahoney with 47 tackles. Isaiah Papali’i chimed in with 35 tackles.

Parramatta’s issues with discipline were more about timing than frequency.

Errors were made with the line open. Conversely, passes were also thrown when the situation called for the tackle to be taken.

It’s difficult to be critical of conceding only four penalties and zero restarts. However, Parra needs to guard against late tackle count infringements. This is when they need to play smart footy. Get the hands off the ball. Peel off the tackle quicker.

This stat of the week is more concerning than strange, but it definitely deserves its own spotlight.

The Eels made 336 tackles with 36 missed and 26 ineffective. This resulted in a defence effectiveness of just under 85%.

That grand total of 62 incomplete tackles against a team which was clearly struggling to score points is quite alarming. There’ll be no title coming the Eels way with such a poor defensive attitude.

Stats Player Of The Week 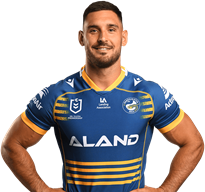 Honestly I wasn’t going to give one this week until I was browsing through the numbers of the game.

Ryan Matterson’s numbers stood out over all others.

Coming off the bench, Matto played 56 minutes, ran for 138 metres from 16 carries, with 41 post contact metres. Throw in two offloads and 30 tackles and it was an effort deserving of this week’s gong.

In my opinion, he’s earned a starting spot ahead of Shaun Lane.

Sometimes it’s just best to put a performance like that behind you and move ahead – in this case that means heading up the M1 to Newcastle.

There can be no excuses for a repeat of Easter Monday this week or any other week in 2022.

Yours in Blue and Gold!

Colmac, so glad to hear you call out Shaun Lane, his performance was well below a first grade standard, a lack of urgency with little respect for the opposition or his own team mates. With this said it is not a unique performance from Shaun Lane. We were disappointing to say the least and you are right, we can not rise to the occassion for the lower teams on the ladder, so do we put this down to the team, or a coaching staff that can’t steel them mentally. By the way it was terrible seeing Nathan Cayless in the… Read more »

Caylo has now been at the Warriors, the Roosters and the Tigers since departing Parra. What role would you see him playing? I regard Ryan Carr as a future NRL coach

Spoke to Cayless at the Anniversary lunch, interesting that his time at the Roosters is the one he said stood out. Believe he tries to bring those philosophies with him even to the Tigers. He is an impressive individual and personally would like to see him assist BA and move on the assistants that have been at the club for some time. Feels like we should be considering new voices and faces so the team can move on from the safety of very comfortable coaches. Understand that they have done a reasonable job ,but things need to be shaken up… Read more »

Cayless has echoed others that I have spoken to regarding setups and it’s no surprise. They consistently say that the coaching/football set ups and the way they go about the training at clubs like Roosters /Storm etc are the reason they are consistently at the top. The Storm continue to do things that are years ahead of others. As big Jack said – it all starts in the front office.

Cayless could replace Kidwell. Kidwell has been getting money under false pretences for way to long.

Really think Lane is better as a bench player 10-15mins either side of half time. Allows him time to be aggressive with his running and offloads without any drop off in his intensity which he tends to do with the longer minutes when starting. Matto would be much better starting.

Great read Colmac. We had some brain explosions during the ambush. The lack of patience was a major concern; short drop outs, 40/20 out on the full were huge negative plays. You have to nail those opportunities. Mahoney wrong options for passing and kicking. His attempt to tackle the ball on Luciano as he was over the line looked embarassing… He should have done better at preventing the try. Did anyone else see Tamou having a nice rest in the ruck when we went for the field goal. Dead set penalty missed. Tamou just laying there and not rolling away.… Read more »

Agreed Matto was good, as was Marata. I think Lane’s days as a starter would be numbered once Marata. And 2 key stats / events that were a symbol of the game –

It was as poorer game from Parra with the ball that I’ve seen for a very long time & it would have been a travesty if we had won. We didn’t respect the opposition, the ball or the game the way we played. Hopefully we won’t be seeing that again this season. The effort was there but the execution was extremely poor.

Absolutely. It would have been terrible if the Eels had won on that performance.
It’s funny how we just go south and off script every now and then.

I agree with everything you have written here. I feel poor tackling & poor, even panicked decisions to pass or offload when they shouldn’t have, often when no one was there to receive it was what gave us this result. I’m glad you mentioned Matto over Lane. I would start him before Lane based on current performance. Great to read some positives after a disappointing loss!

Tks Colmac. We lost (murdered) the error count 14-7, although the 6 Agains were 5 blot in our favour. I always find it interesting when a team successfully spoils/infringes and wins. It definitely works when the target team loses composure. 7 errors is very good though, the average this year is around 11. The Tiges had a good day at the office.

Looking at it from the stands and without seeing any stats I thought Matterson was one of our best out there Monday.

I thought Marata was robbed of ball early in the game. The first run I remember him getting was about 20 minute mark of the first half.

From then on he was awesome.