It’s not unusual for wingers to provide highlight moments during a training session.

Given that opposed work is a type of match simulation, there will be opportunities created for the fast men out wide. There will be spectacular finishes, and conversely a big defensive play from a winger might also feature.

So just as those flashes of glory happen for the speed men in every NRL round, so too will they occur on the training track.

However, there aren’t too many Dally M 3s awarded to wingers, and likewise naming a winger as the session stand out is equally rare.

After Friday morning’s session, I found it difficult to not acknowledge Haze Dunster as a contender for best on field. 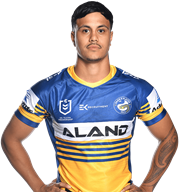 From the opening minutes, Dunster’s involvement was high.

The backfield carries are the bread and butter for the back three and as expected Haze carted the ball up strongly. But any early work was just the prelude.

As the players warmed into the play, Haze was proving difficult to contain. He seemed to be winning most collisions, was evasive when given space and made the right decisions in defence.

Then the try scoring opportunities kicked in. Firstly there was his professional finish to a perfect Gutherson pass to cross in the left corner.

The ever-improving winger then set up a try for Dylan Brown as he cut infield beating multiple defenders before linking with his Kiwi mate who scored under the posts.

I had the opportunity to congratulate Haze later in the day and he immediately turned the praise to Sean Russell. And there was definitely justification in doing so.

During the opposed “match”, Russell made a couple of lengthy sprints downfield after being given space through terrific work by his inside men.

Later, during the red zone opposed drills, Russell demonstrated his pace and swerve when he cut back infield to score, then later he crossed in Russell trademark fashion – getting down low and dive/sliding into the corner.

There were others to also congratulate for the way they finished the week. 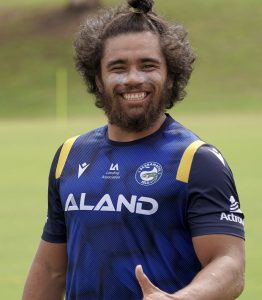 Isaiah Papali’i is building impressively towards the season opener. He seems to be crossing the line in every opposed drill, beating defenders with the type of power line running that I first brought to everyone’s attention during the last preseason.

I have no doubt that Ice will be doing everything in his power to have an bigger season and depart the Eels on a high note.

Matto is looking very comfortable whenever he plays in the middle. His strength comes to the fore and he impresses as his involvement levels are high.

I haven’t mentioned Jordan Rankin too frequently this preseason. He has both a playing and a pathways coaching role with the club in 2022. Rankin has again been playing in the halves during opposed drills and he looks like the experienced footballer that the Eels recruited him to be. On Friday morning, I thought that his kicking game was worthy of praise. 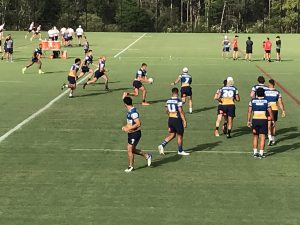 After two of his winger compatriots had garnered most of the attention, Bailey Simonsson provided BA with a “hold my beer“ play when he converted a half chance to a try during the red zone drill. He first used his pace to get outside his opposite, then just as the defence looked to have him covered he produced one of those spectacular dives into the corner, with part of his body actually over the sideline.

Yes, we do see such moments on the training track.

Finally, Reg scored a try off a superb short ball from Rein, then Naiduki got over in the corner after Jake Arthur got on the outside of a defender to create an overlap.

There was a healthy dose of Malcolms run by the defending team to add fatigue during the red zone opposed drills. Footy remains a battle of attrition. Defensive effort on effort under fatigue is seen in every round, especially during repeat sets on the try line. Every team would be preparing for that during their preseason.

I have to say that I am really pleased to read how Haze has picked up his game skills in what is really a shortish term in the NRL, I sincerely look forward to his continued improvements and has a spot firmly cemented on the wing for the eels. Well done Haze and you have put the critics to bed and they are better there, rather than the critics. We lose some good players at years end, but I also have a feeling that the replacements will be more than capable of taking the mantle further on the field. Thanks… Read more »

You’re welcome Colin. It’s been a slightly longer journey for Haze than a couple of his peers, but he’s probably laid a very firm foundation.

Sounds like haze holds his own on returns , wat I’m trying to work out is his weight , he’s listed on the eels site as 90kg surely he’s at least 96. Also does haze have real speed or just run of the mill. A lot of ppl bag sivo and fergo, but in some situations they had try scoring x factor , it’s yet to be seen if haze has that. Thanks for the interesting write up sixties, always appreciated

I loved Haze’s last half dozen games last year. He went from being nervous and unsure to playing like a veteran. Very excited to see what he produces this year.

He is definitely a player of greatly improved confidence.

Great review. If Haze keeps improving I’m note sure there is a place for Mika. I think Parra’s outside backs are somewhat better than what certain pundits are saying.

Shaun, read an article or snippet of one a couple or more weeks back, and it was mentioned in the article that Sivo is looking at not taking up his option for 2023. It does not surprise me really given the number of injuries he has had in the past couple of years. I have said for a while now, that it would not surprise if he tried for a medical retirement with the NRL. In the article I mentioned he is looking at Europe & RU. I would agree that we have a pretty solid set of backs as… Read more »

The other argument is that having to fight for your spot can bring out your best. We shall see.

I wouldn’t be surprised given last year was a mixed season for him even before the injury. And I do think the NRL is heading towards more mobile wingers which is not a strength for Sivo. But as Sixties says, having to fight his way back might bring out the best in him.

There’s a saying about not giving others the opportunity in your spot. Haze has taken his opportunity.

Problem is Shaun the pundits this time of the year are generally staff writers and they know less than those who pose as professionals sports analysts.

Oh yeah. There seems to a narrative about the Eels in 2022 that quite a few have bought into.

Even some “experienced” journos have those narratives ready to roll throughout the year.

There’s been some hilarious takes.

Hey mate, has I Pap been training in the middle or on an edge? Assuming probably a bit of both.

My tip is that he’ll play edge. That’s where he’s been shining.

Sixties I found your comment about Matto interesting. When he came back at the end of the 2021 season he played in the middle and I thought that was the best he played all season.

Furthermore I think Marata plays his best football on the edge. He is also very good in the middle but I think best on the edge.

It’s where I’m selecting them at this stage.

Speaking of wingers, how’s Solomone Naiduki travelling? I haven’t see his name mention much in the training reports

Solomone is a big unit and his weapon is his size rather than express pace. His preseason has been a level up on last year – as it should be. I mentioned him using his footy smarts in taking a tackle on a long break in an opposed session last week as they scored off the next play. He will start at NSW Cup level and the rest is in his court.

I’d be really keen to hear how Will Penisini is travelling. He seems like one of the genuine future superstars of our game and he didn’t look out of place in the finals last year.

He’s a class act and will provide plenty of opportunities for Simonsson.

Hi Sixties – I’m coming down ftom Qld with my brother and some mates for the Round 4 game v Dragons. It’s a Sundsy night game so I’m assuming there will be a Captains Run on Saturday. Is it possible for members of the public to attend these training sessions. Cheers

It depends on where it’s held. If it’s at the Stadium then they are lock outs. If it’s at Kellyville, that’s an open park.

Good mix of names getting mentioned including some of the fringe players. Pleased to hear Matto might be finding his feet in a new role. We haven’t been known for pace so exciting that Russell & simonsson are standing out in that regard.

DDay, if Simonsson hadn’t been recruited then I’d suggest I’d be locking Sean in. The interesting thing is that both Bailey and .sean can play multiple backline positions, so they are probably in direct competition with each other. Perham similarly hits that utility role.

Sixties, is Perham the player who played fullback in the game towards the end of last season when we basically fielded a second’s team?
If so, geez I was impressed with the amount of potential and skill he displayed. He seemed to have an ability to hit top speed very quickly and possessed a great step. He also seemed to have some similar attributes to a young Hayne actually.
Cheers.

Thx Grunta , that’s given me the impetus to dig out that game and rewatch.

Matt, it was a terrific first half from that team.

Yes, Grunta that is him. He will likely play fullback at NSW Cup this year.