It was 30 years today, Sgt Sterling showed the Eels to play ….. Well, not quite 30 years ago today, just over 29 years, Saturday 5th March 1988 to be exact, but we did have a general leading us around the field by the name of Sterling. On that day, he and his blue and gold troops emphatically showed the Knights how to play! 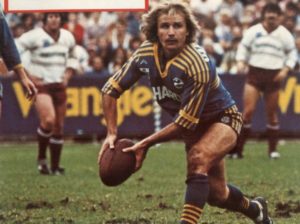 Sgt Pepper? … no …. but we did have a General we called Sterlo!

For Newcastle, it was a proud day. A foundation club in the inaugural years of the Sydney Rugby League competition, Newcastle hadn’t fielded a team since end of the 1909 season. Now, they were finally back. In the weeks before, Newcastle had played a trial game against Manly, the defending premiers at the time and notched up an encouraging 24-12 victory. Hopes were high for the new team on the block.

But running out onto the Newcastle Sports Ground was a team still bristling with talent and the ability to spoil any party – the 1988 Parramatta Eels.

In the preseason, Steve Ella was quoted in Rugby League Week as saying that people will start calling the Eels “Dad’s Army”. He also went on to issue a warning in his interview that the Eels should not be taken lightly. 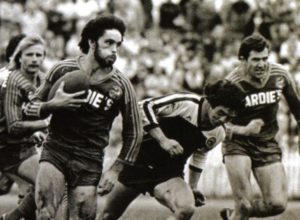 The one and only Zip Zip Man, Steve Ella

The Parramatta team that took the drive up the Newcastle Motorway contained the names of Sterling, Kenny, Ella, Grothe. It still boasted an impressive forward pack with Queensland and Australian lock Bob Lindner, “The Bookend” Geoff Bugden, Peter Wynn, the workhorse Michael Moseley and now playing in the pack, Paul Taylor.

For Newcastle, it would be a while yet before players like the Johns brothers, the Gidley’s, Buderus, and Harragon would become household names and local heroes, but the locals wanted their return to Rugby league to be a celebration. Unfortunately for them, Sterling, Kenny , Ella and Co’ would be at their party spoiling best

Over 26,000 fans were on hand as both sets of combatants took the field. Most teams running out to face a crowd like this would have been rattled. The sheer size of the crowd, the atmosphere let alone the occasion of such a day, would fill any player’s stomachs full of butterflies but not the star studded Parramatta Eels. For the likes of Kenny, Sterling, Ella, Grothe, Taylor, and Wynn, the core of the team that had played in five grand finals, the occasion was never going to over power them. 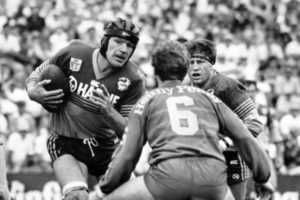 From the opening whistle, the Eels were in control and never in any danger. After leading 16-2 at half time, the class of the Eels would prove to be too much for the Novocastrians who failed to cross the try line (their only points coming from two Robbie Tew penalty goals). For the Eels, Erickson, Grothe, Wynn and Ella all came away with four pointers. Steve Ella’s boot was on song, converting all four tries and bagging two penalty goals, landing a perfect six from six for the day.  The final score of 28-4 reflected that the Eels were never in any danger.

The Eels side that day was –

Hey guys, sorry not article related. Just thought I’d mention the Fox NRL Market Watch podcast has put up an interesting 35 minute chat about Parramatta that you might enjoy!